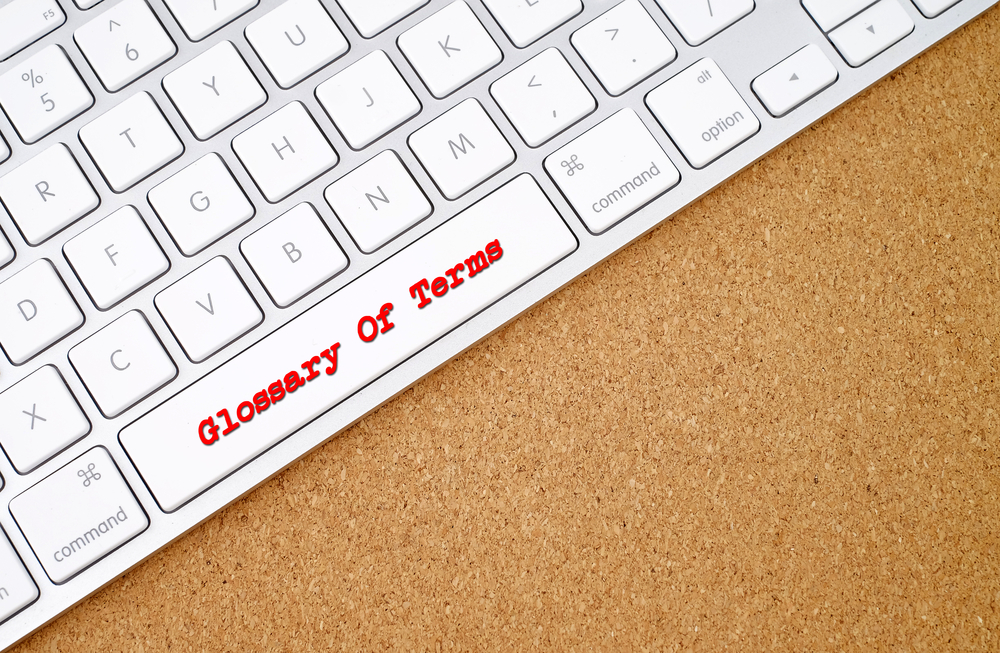 Cybersecurity has emerged as a challenging domain for both security professionals and general internet users. Nowadays one cannot afford to remain unaware of what’s happening in cybersecurity because a lot is at stake. Almost everyone has an bank account which one can access over the internet. Moreover there is increase in cashless transactions which has sprouted the growth of credit cards and debit cards. Although these things have definitely made life convenient but they also provide an opportunity to the hackers to steal our money. Any given day a large number of people are duped on the internet. It has become necessary that one should keep himself/herself updated with latest cybersecurity terms and jargon.

Attribution: Many times you must have heard that cyber warfare is non-attributable. It means that it is extremely difficult to establish the identity of the attacker with 100% certainty. Attribution refers to the process of establishing who is behind the cyber attack; to whom you can attribute the attack to. Since hackers hide behind a large number of layer through different techniques, it is extremely difficult to establish their identity which makes attribution a difficult job.

Backdoor: Often programmers create a secret entrance into the computer programs that bypass security mechanisms. These entrances are known as Backdoors. Programmers usually create these entrances so that they can jump directly into the programme for troubleshooting or other purposes. However, many times hackers gain knowledge of these backdoors and tend to exploit it. Remember Nimda? The virus that caused a slowdown across the internet in 2001. It gained entry through the backdoor left by Code Red.

Big Data: It refers to the extremely large data sets that may be analysed computationally to reveal patterns, trends, and associations, especially relating to human behaviour and interactions.

Botnet: A botnet which is also known as a “zombie army” is a number of computers connected to the internet that, although their owners are unaware of it, have been set up to forward transmissions including spam or viruses or DDoS attacks to other computers on the Internet.

Brute Force Attack: In cryptography, a brute-force attack consists of an attacker trying many passwords or passphrases with the hope of eventually guessing correctly. The attacker systematically checks all possible passwords and passphrases until the correct one is found. It is done through an automated process which guesses all possible combinations until success is achieved. However, nowadays modern encryption systems use different methods for slowing down brute force attacks. For example, almost all systems allow only few chances and a limited time to login using the correct password .

Deep Web: The deep web is that part of the Internet whose contents are not indexed by standard search engines for any reason. The deep web is opposite to the surface web.The Surface Web is that portion of the Internet that is readily available to the general public and searchable with standard web search engines like Google and Bing. It is also known by various other names like Clearnet, Visible Web, Indexable Web and Lightnet. It is estimated that Google’s index of surface web contains around 15 Billion pages. The deep web includes many very common uses such as web mail, online banking but also paid for services with a paywall such as video on demand, and many more. It is also known by other names like Invisible Web and Hidden Web.

Dark Web: Within Deep Web, is located the Dark Web. It is the bottom most layer of the internet. Although the terms Deep Web and Dark Web are used interchangeably, there is a nuanced difference between the two which should be clear to any cyber professional. The Deep Web includes all the web pages that search engines cannot find. Thus Deep Web includes the Dark Web also. However, it is not restricted to only Dark Web but includes much more like user databases, webmail pages, registration required web-forums and pages behind paywalls. Dark Web is infamous for illegal activities and black markets selling drugs, narcotics, psychotropic substances, arms and ammunition.

Digital Certificate: Also known as public key certificate and identity certificate, it is an electronic document used to prove ownership of a public key.

End-to-End Encryption: You must have heard about this term recently. Remember? No? Ok. Check your Whatsapp chats. Whenever you start a new conversation on Whatsapp, you will be able to see a message “ Messages you send to this chat and calls are now secured with end-to-end encryption.” When end-to-end encrypted, your messages, photos, videos, voice messages, documents, and calls are secured from falling into the wrong hands. Your messages are secured with a lock, and only the recipient and you have the special key needed to unlock and read your message.

Exploit: a software tool designed to take advantage of a flaw in a computer system, typically for malicious purposes such as installing malware.

Hacker: As per the MIT New Hacker’s dictionary, a hacker is a person involved in exploring the details of programmable systems and how to stretch their capabilities. However, the term has nowadays been corrupted to signify any person who breaks into a network with malicious intent. The real term for this act is Cracking and the person is known as Cracker. Nowadays a new class of hackers known as “Hacktivist” has emerged. A hacktivist is any individual or group which hacks for political goals. For example Edward Snowden, Chelsea Manning and the infamous group Anonymous.

Man-in-the-middle: Often abbreviated MitM, MiM attack, or MitMA, it is an attack where the attacker secretly relays and possibly alters the communication between two parties who believe they are directly communicating with each other. It is a type of data integrity attack.

Metadata: It refers to the data which gives information about other data. For example, the timing and address details of any email message you send will form its metadata. Another example would be if you put a status update on Facebook. The location from where you update it would form its metadata. No matter how innocuous or harmless it looks, it can be used to establish your location.

OpSec: Short form for Operational Security, its origin lies in U.S. military jargon. OpSec is a process that identifies critical information to determine if friendly actions can be observed by enemy intelligence, determines if information obtained by adversaries could be interpreted to be useful to them, and then executes selected measures that eliminate or reduce adversary exploitation of friendly critical information. OpSec is a practice that begins with identifying what information needs to be kept secret, and whom you’re trying to keep it a secret from.

Password Managers: With the increasing number of personal and professional accounts on various websites, remembering different passwords had become an arduous task but not anymore. Applications named Password managers can do that task for you. A password manager is a software application that helps a user store and organize passwords. Password managers usually store passwords encrypted, requiring the user to create a master password; a single, ideally very strong password which grants the user access to their entire password database. Examples include LastPass, 1Password.

Penetration Testing: It is a process which aims to evaluate the security of an IT infrastructure by safely trying to exploit vulnerabilities. These vulnerabilities can exist in any of the following like operating systems, service and application flaws, improper configurations, or end-user behavior. Such assessments are very useful in validating the efficacy of defensive mechanisms, as well as, end-user adherence to security policies.

Phishing: It is an attempt to obtain sensitive information such as usernames, passwords, and credit card details often for malicious reasons, by posing as a trustworthy entity in an electronic communication.

RAT: It stands for Remote Access Tool or Remote Access Trojan. Hackers mostly use them as a malware. When installed in your computer, a hacker can gain full control of your PC. A RAT after installation establishes contact with the remote server from where it takes commands. They are nowadays available for a price on the internet.

Ransomware: Its a type of malicious software designed to block access to a computer system until a sum of money is paid. Nowadays it is quite popular among the cyber criminals and has a huge demand in Crimeware-as-a-Service (CaaS) market.

Shodan: Also known as “hacker’s Google,” and a “terrifying” search engine. It connects devices instead of websites. Using Shodan you can find unprotected webcams, baby monitors, printers, medical devices, gas pumps, and even wind turbines. Well that does sound terrifying but Shodan helps researchers find these devices and alert their owners so they can secure them.

Social Engineering: An act of social engineering means a hacker is trying to psychologically manipulate the target to perform an act. Mostly the act refers to download an infected attachment in an email. A typical email comprises of a subject, body and an attachment. The subject comprises of a topic that will be of interest to the user. Example contacts list, budget, party, farewell etc. The subject acts as “click-bait”. These attachments are mostly Microsoft Office files like Excel documents, Word files, PowerPoint files and PDF files but are laced with Trojans and once the reader opens the attachment this exploit code is executed which compromises the system.

Spear phishing: It is an email that appears to be from an individual or business that you know. But it isn’t. It’s from the same criminal hackers who want your credit card and bank account numbers, passwords, and the financial information on your PC.

Tails: If you are a Snowden fan then you should work on this operating system. It is the only Operating System which Edward Snowden endorsed. Its also known as amnesic operating system. Every Time you start your system, it looks like a fresh system as previous history is deleted. In reality it doesn’t leave any trail.

Worm: It is a type of malware that replicates itself in order to spread to other computers. Often, it uses a computer network to spread itself, relying on security failures on the target computer to access it. Unlike a computer virus, it does not need to attach itself to an existing program.

Zero-Day: A zero day vulnerability refers to a hole in software that is unknown to the vendor. This security hole is then exploited by hackers before the vendor becomes aware and hurries to fix it this exploit is called a zero day attack.

How can I remove Ransomware without paying a single pen ...

KeySniffer : How an attacker can sniff your data from 2 ...