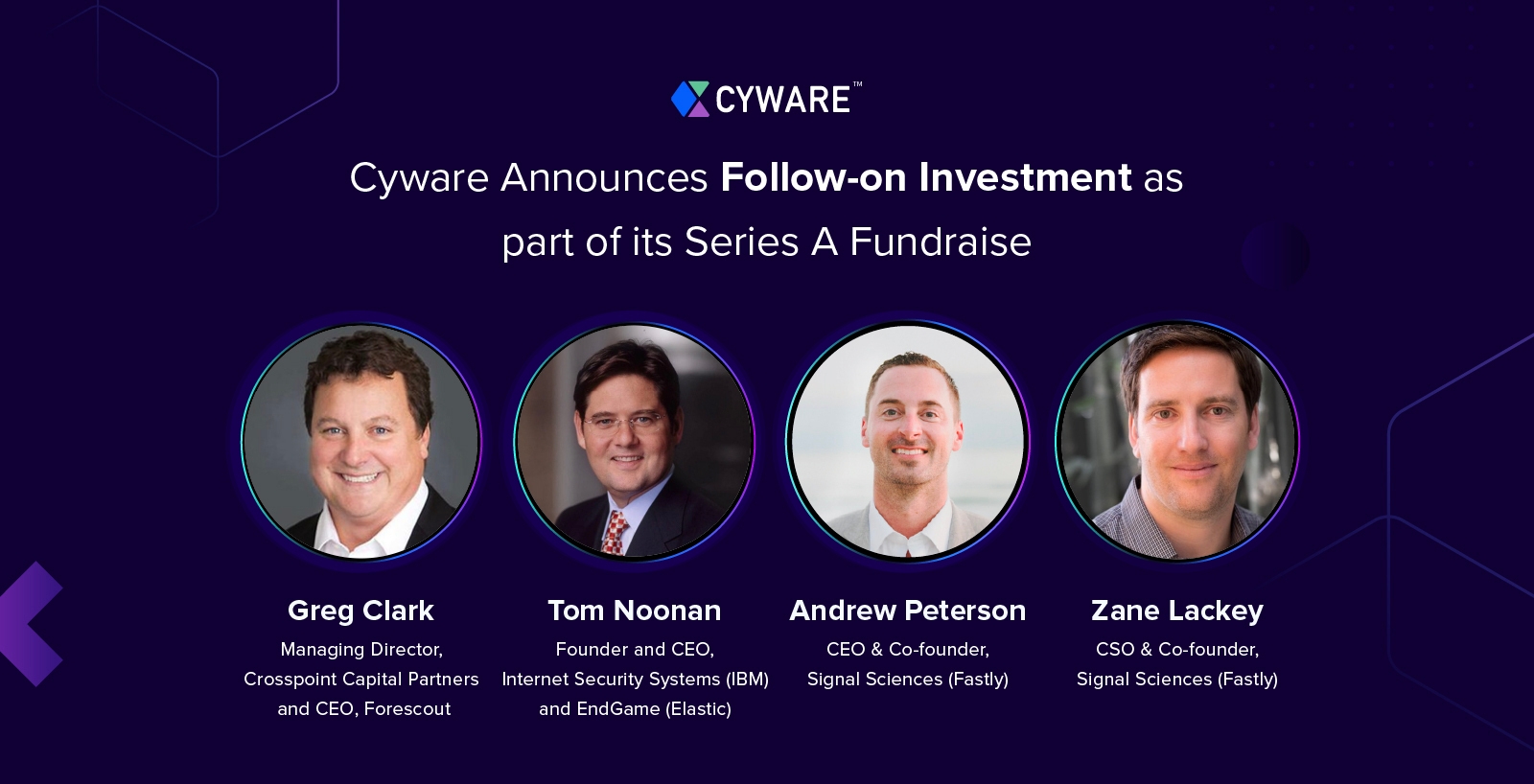 NEW YORK - January 11, 2020 - Cyware, the industry's only Virtual Cyber Fusion Center Platform provider featuring next-generation SOAR technology, today announced that it received follow-on investment to its Series A funding round.
Due to overwhelming demand for its Cyber Fusion Center platform technology, the oversubscribed funding round features proven cybersecurity leaders including: Greg Clark, Managing Director of Crosspoint Capital Partners and CEO of Forescout; Andrew Peterson, CEO and Co-founder, Signal Sciences and Zane Lackey, Co-founder, Signal Sciences, recently acquired by Fastly (NYSE: FSLY); and Tom Noonan, Founder and CEO of Internet Security Systems (ISS), (NASDAQ:ISSX) acquired by IBM (NYSE: IBM) and Endgame, acquired by Elastic (NYSE: ESTC).
“I’m personally ecstatic that Cyware has been able to recruit the world’s most intelligent and strategic cybersecurity industry practitioners to play a pivotal role in our aggressive growth,” said Anuj Goel, CEO and Founder, Cyware. “Adding the breadth of experience to the Cyware team will support the build-out of a sustainable and scalable cybersecurity business.”
Greg Clark, Managing Director of Crosspoint Capital Partners and CEO of Forescout, has held executive leadership roles at globally-recognized cybersecurity firms, including serving as CEO and Board of Director of Symantec Corporation, which followed his role as CEO of Blue Coat Systems, Inc. He’s served in leadership roles with Thoma Bravo, IBM, and other successful cybersecurity firms and serves on multiple boards. “Cyware is light years ahead of the market in terms of delivering intelligent automation and orchestration to security teams,” said Clark, who invested in Cyware through Crosspoint Capital Partners.
Tom Noonan has held numerous cybersecurity leadership, advisory and investment roles, where he has scaled companies successfully. Notably, he served as the Founder and CEO of Internet Security Systems, (ISS) which was acquired by IBM, and Endgame, which was acquired by Elastic NV. He currently holds board positions with a number of cyber and software firms. “The excitement around Cyware is contagious within the cybersecurity market,” said Noonan, who also invested in Cyware. “Cyware has done a masterful job at pinpointing the pain around orchestrating threat intelligence, case management and automated response, for teams looking to optimize security operations.”
A recognized leader in Information Security as CEO and Co-founder of Signal Sciences, Andrew Peterson led the $825M sale of Signal Sciences to Fastly, and now leads the Fastly security practice. Prior to Signal Sciences, he’s led high-performance product and sales teams at firms including Etsy, Google, and the Clinton Foundation. He’s also a noted author with O’Reilly publishing. “Cyware is the very definition of innovation in the security operations center, and is taking a unique approach to making cyber teams smarter and faster,” said Peterson, who invested in Cyware.
Zane Lackey, Co-founder of Signal Sciences, (acquired by Fastly), is well-known in the cybersecurity industry and serves on multiple advisory boards and is an investor in modern cybersecurity and DevOps companies. Lackey is a recognized author for O’Reilly publishing, and has been on the forefront of the DevOps/Cloud movement across multiple firms, including his role as CISO of Etsy. “Cyware is removing complexity from a complex set of challenges faced by every cybersecurity team today,” said Lackey, who also invested in Cyware. “The ability to get smarter and faster within the SOC is critical to the success of any cyber team. Cyware’s innovation simplifies how teams can build Cyber Fusion Centers.”
This announcement comes a week after Cyware announced two executive appointments to the leadership team.
About Cyware
Cyware helps enterprise cybersecurity teams build platform-agnostic virtual cyber fusion centers. Cyware is transforming security operations by delivering the cybersecurity industry’s only Virtual Cyber Fusion Center Platform with next-generation SOAR (security orchestration, automation, and response) technology. Built on innovation designed by SecOps practitioners and cybersecurity leaders, Cyware offers multiple technologies within its next-generation platform, including advanced threat intelligence solutions (TIP) for large and small security teams, vendor-agnostic security automation (SOAR), and security case management. As a result, organizations are able to increase speed and accuracy while reducing costs and analyst burnout. Cyware's Virtual Cyber Fusion solutions make secure collaboration, information sharing, and enhanced threat visibility a reality for enterprises, sharing communities (ISAC/ISAO), MSSPs, and government agencies of all sizes and needs.
To learn more about Cyware, visit cyware.com.
View Full Press Release