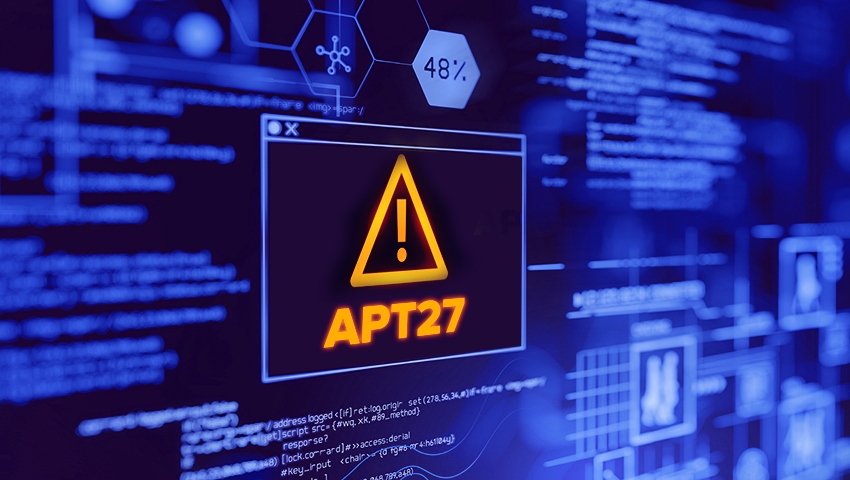 APT27 is a Chinese threat group known for extensively using watering hole and spear-phishing attacks to target victims. The threat group, which has been active for over a decade, uses multiple malware and exploits numerous vulnerabilities to meet its espionage goals. It keeps altering its attack strategies and ploys to avoid detection while spying on victims. Lately, the group seems to have started working on a new model of espionage, along with financially motivated attacks, by including ransomware in its attack campaigns.

APT27 is capable of deploying a variety of tools and tactics for its cyberespionage missions. Between 2015 and 2017, the threat group compromised victims' networks using watering hole attacks via nearly 100 compromised legitimate websites.
Despite public disclosures of its activities in 2017, the gang’s cyberespionage operations continued with evolution in its methods. In February 2019, the group attempted living-off-the-land attacks to steal information on cutting-edge weapons technologies and spy on dissidents and other civilian groups.
In March 2020, the APT group abused the COVID-19 pandemic fear to lure people by sending thematic email campaigns or thematic IM with phishing/malware links. In April 2020, it had carried out cross-platform attacks on back-end servers to steal business data.

In 2011, a honeypot computer discovered the exploitation of vulnerabilities in Microsoft products, in which APT27 dropped Gh0st RAT. In 2013, the group was discovered using various PlugX malware strains. The same year, the group deployed a web shell, known as China Chopper, during attacks on SharePoint Servers belonging to the Middle East Government. In June 2016, a malware variant of HttpBrowser was discovered, which researchers linked to the APT27 group. It targeted a consumer drone company in Europe.
In February 2018, the group had launched an attack campaign named PZChao, using two versions of the Mimikatz password-scraping utility to collect passwords and upload them to the C2 server. The threat actor tried its hand at cryptomining attacks using ZombieBoy malware, which abused multiple vulnerabilities to compromise targeted networks, such as CVE-2017-9073, CVE-2017-0143, and CVE-2017-0146. In September 2018, multiple infections from a previously unknown trojan were discovered in an attack that used a malicious NDISProxy driver with a certificate of a Chinese IT company.
In January 2020, APT27 used an updated version of ZxShell RAT to target the latest version of Windows 10.
In January 2021, the attackers deployed Clambling and PlugX using an older Google Updater executable that was exposed to DLL side-loading. Additionally, they abused CVE-2017-0213 to escalate privileges. It was found utilizing other tools that include ASPXSpy webshell, post-exploitation tool bitsadmin, HyperBro backdoor, BitLocker, MimiKatz, and a cryptominer. In March 2021, the group exploited several vulnerabilities, including CVE-2021-26857, CVE-2021-26858, CVE-2021-27065, and CVE-2021-26855 (ProxyLogon) vulnerabilities affecting Microsoft Exchange servers. In April 2021, the group updated its toolkit with an updated SysUpdate malware variant. In September, researchers alleged that APT27 was behind an attack campaign exploiting the vulnerability CVE-2021-40539 in Zoho’s ManageEngine product, ADSelfService Plus. However, a similar attack that abused a newly identified vulnerability (CVE-2021-44077) in Zoho's ManageEngine ServiceDesk Plus was dedicated to the Chinese group.
In January 2022, security experts discovered APT27 relying again on HyperBro RAT to backdoor targets in Germany. Meanwhile, fileless and socketless backdoor malware—dubbed SockDetour—was used against U.S. defense contractors in February, which researchers suspected to be linked to APT27 group.

APT27 first shot into the limelight in September 2015 when it stole trillions of bytes of confidential data from the U.S. government and its military defense contractors, intelligence agencies, and FBI-based partners. The next month, a variant of Korplug RAT (aka PlugX) was found disguised as an antivirus to target Vietnamese institutions and doxxing 400,000 members of Vietnam Airlines. The group carried out an espionage campaign in June ??2018 when it discreetly planted malware into Mongolian government websites. Researchers disclosed Syrian users as the group’s next target in the following month. It used Windows and Android spyware to exfiltrate sensitive information from their devices.
The group forayed into financially motivated cybercrime scenes from 2021 onward and started using ransomware in the attacks. It reportedly infected the servers of several major gaming companies globally. They launched attacks on the Vietnamese government and military organizations in an advanced campaign, researchers revealed in April 2021. The next month, the threat group installed web shells on Sharepoint servers to compromise government organizations. Later in December, a chat software Able Desktop, used by 430 government agencies in Mongolia, was abused to spread the HyperBro backdoor, Korplug RAT, and Tmanger. During its attack on the Zoho platform, APT27 impacted at least nine organizations across multiple critical sectors worldwide, including defense, energy, healthcare, technology.
In January 2022, German domestic intelligence services were warned against ongoing attacks coordinated by APT27. The group is also suspected to be a part of a larger TiltedTemple campaign, wherein the networks of at least one U.S. defense contractor were compromised.

The group has targeted multiple regions around different parts of the world, including America, Asia, the Middle East, and Europe. As for the targeted sectors, it has always appeared interested in government, information technology, research, business services, high tech, energy, aerospace, travel, automotive, and electronics. Some of the notable targeted entities include Amper SA, Microsoft, Able Desktop, Mongolian government agencies, Turkish agencies, and German commercial organizations.

The use of email as an attack vector by APT27 is very common and looking at the seriousness of this threat, organizations are suggested to train their employees regularly. As for protection against web shells, employ regular updates to applications and operating systems to fix any known vulnerabilities. To limit misuse of unauthorized access, implement a least-privileges policy on the webserver to reduce the ability of attackers to escalate privileges or pivot laterally. As APT27 also conducts ransomware attacks, it is recommended to keep a frequent backup of sensitive information and apply robust anti-ransomware solutions for better protection. Moreover, the best way to counter that keeps on continuously evolving its attack vectors is by operationalizing threat intelligence across security workflows using advanced threat intelligence platforms.

APT27 seems to be active at present and has already shown advanced capabilities in targeting victims using different malware and methods. Further, the group takes advantage of every possible vector to get access inside targeted organizations. It keeps on continuously updating its tools, tactics, and procedures (TTPs) to stay ahead in the game. Researchers suspect that the group will continue its attacks and come up with more enhanced tactics in the near future. Thus, organizations should stay alert and proactively track this threat group to ward off any forthcoming damage to their business.