What Formats and Protocols does TAXII Support?

What are TAXII Server and TAXII Client?

What are TAXII Collection and Channel?

Why Hub and Spoke is the Most Widely Used Model?

What are STIX and TAXII? 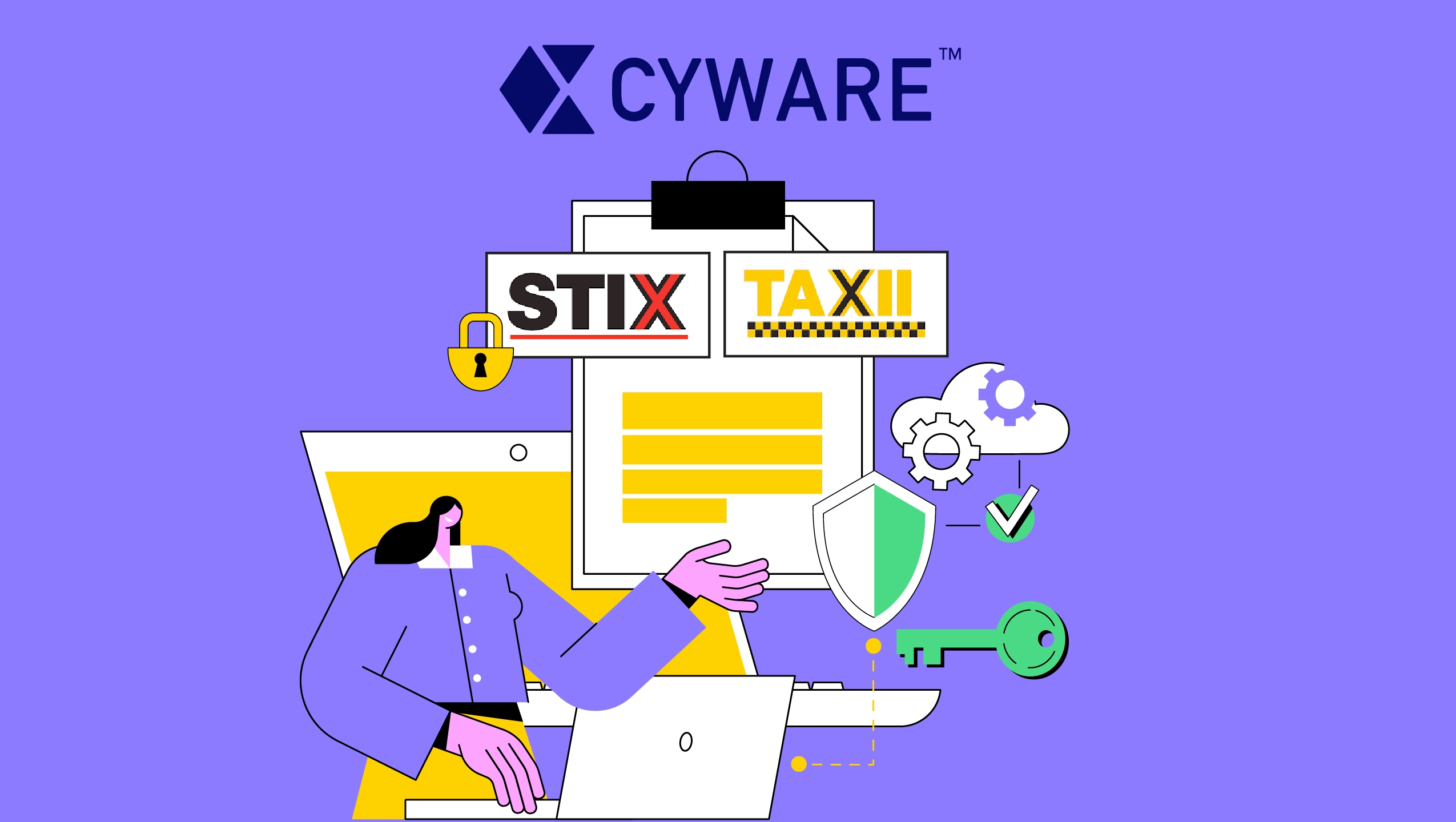 Structured Threat Information eXpression (STIX) and Trusted Automated eXchange of Indicator Information (TAXII) address the aforementioned questions by making information consumable and shareable in a standardized format. They are two open, community-driven standards that allow the automated sharing of cybersecurity threat information. STIX and TAXII enhance the overall sharing strategy and facilitate a collaborative security strategy between organizations against cybersecurity threats.
In technical terms, STIX and TAXII are not sharing programs, tools, or software, but rather components and standards that support the automated expression of cyber threat information. While STIX defines ‘What’ of a potential threat, TAXII defines ‘How’ the information is transmitted.
Both standards were originally developed at MITRE under the supervision of the Department of Homeland Security (DHS), the Office of Cybersecurity and Communications (CS&C), the National Cybersecurity and Communications Integration Center (NCCIC), and the US-CERT. In 2015, the ownership of the standards was shifted to the Organization for the Advancement of Structured Information Standards (OASIS) and continues to be maintained by them.

Structured Threat Information eXpression (STIX) is a programming language for representing cyber threat intelligence in a standardized and structured format. STIX enables organizations to share threat intelligence with one another in a consistent and machine-readable manner, allowing security teams to better understand cyberattacks and respond to them more effectively. With STIX structure, security teams can describe a threat in various aspects such as:
STIX was first presented in 2012 to describe cyber threat information and since then has undergone multiple changes. Over the years, the standard has been overhauled to include multiple properties for expressing various kinds of threat information based on the type of attacks.
For expressing information about cyber threats in a structured way, STIX is built on three components:

Many organizations are increasingly adopting the new STIX 2.x standards that are more streamlined than the older STIX 1.x versions. Due to a different approach followed, STIX 2.x sets a strong foundation for developing threat intelligence solutions and also provides flexibility for adding more features through new Standard Domain Objects (SDOs).
Unlike STIX 1.x which was defined via XML, STIX 2.x objects are represented using JSON, a language that is mostly favored by developers. In STIX 2.x, all SDOs are top-level and can be linked with each other using a named relationship type, which was a major drawback in STIX 1.x. Because certain object types in STIX 1.x are not top-level and are embedded in other objects, it was challenging to express a relationship between two objects and hence was not effective in the shared knowledge needed for cyber threat intelligence.
There are currently 18 top-level objects available under STIX 2.1 to identify threat data and can be linked to each other to indicate certain types of relationships to aid in the classification of threats. These 18 objects are:

Trusted Automated eXchange of Indicator Information (TAXII) is an application layer protocol that enables sharing of actionable threat information across organizations, products, and services. It empowers organizations to achieve situational awareness about emerging threats, whilst enabling them to further share the information with partners as they need. The core components of TAXII include:

What Formats and Protocols does TAXII Support?

TAXII is used in conjunction with STIX and supports the exchange of threat information over HTTP/HTTPS message protocols. Just like in STIX, multiple new features have been added to TAXII since the first version 1.1 was released in 2012. TAXII 2.x is the latest version and is considered an augmentation of the older version of TAXII 1.x. While the previous versions were designed to align with XML-based STIX format, the new versions of TAXII are format-agnostic and do not rely on any specific threat intelligence format. As the current versions of TAXII are not tied to any specific format or message protocol, they can accommodate multiple threat-sharing communities with different networking protocols and message format constraints.

What are TAXII Server and TAXII Client?

What are TAXII Collection and Channel?

TAXII Server and Client are built on two defined services that can support a variety of threat-sharing models. They are:
Collection: In this, TAXII Client and Server exchange information in a request-response manner. The Server acts as a repository of cyber threat intelligence objects. 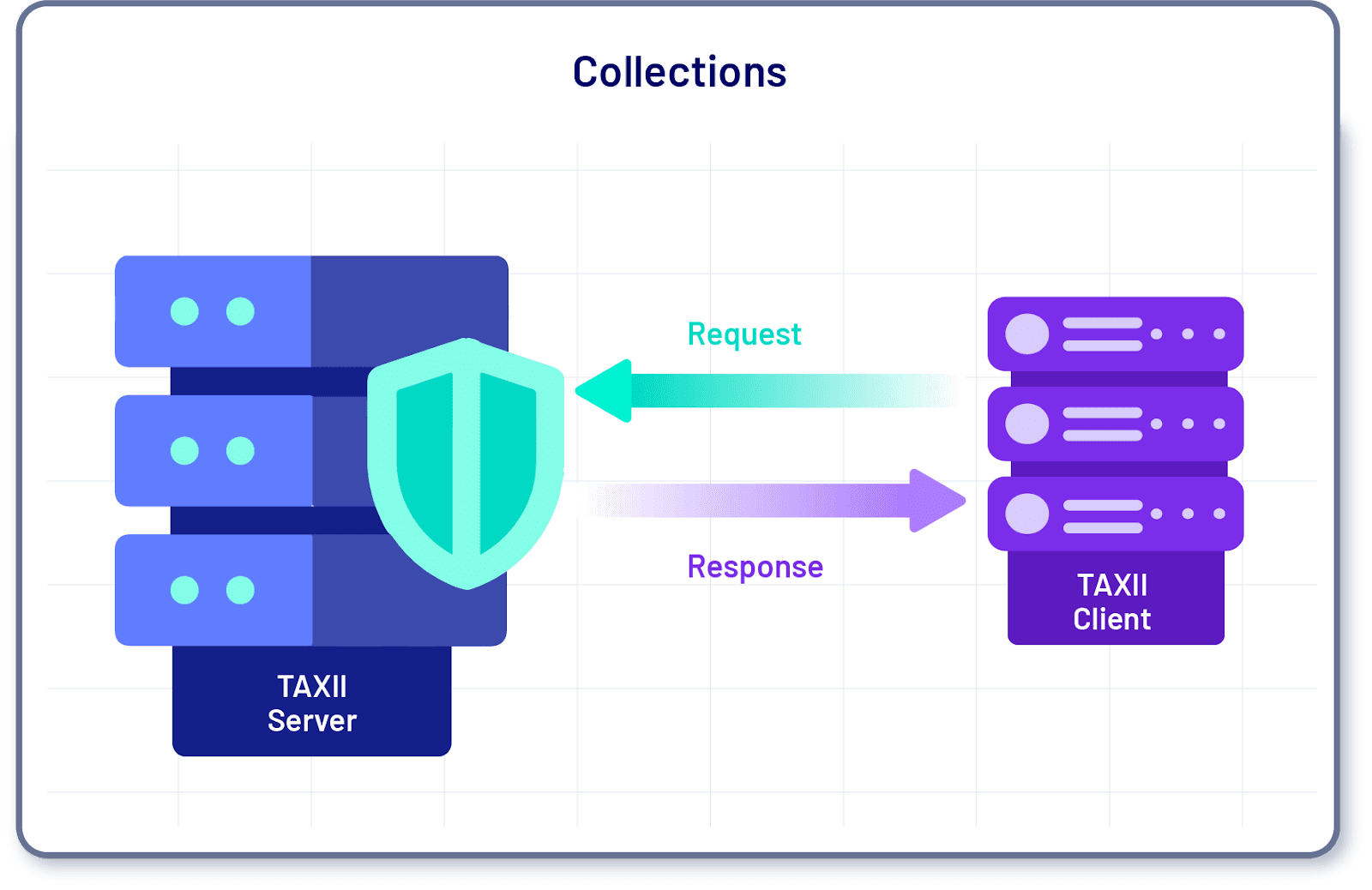 Channel: In this, TAXII Clients, with TAXII Server at the center, can exchange information with other TAXII Clients in the publish-subscribe model. Here TAXII Server acts as a channel to push the data from one client to different clients. 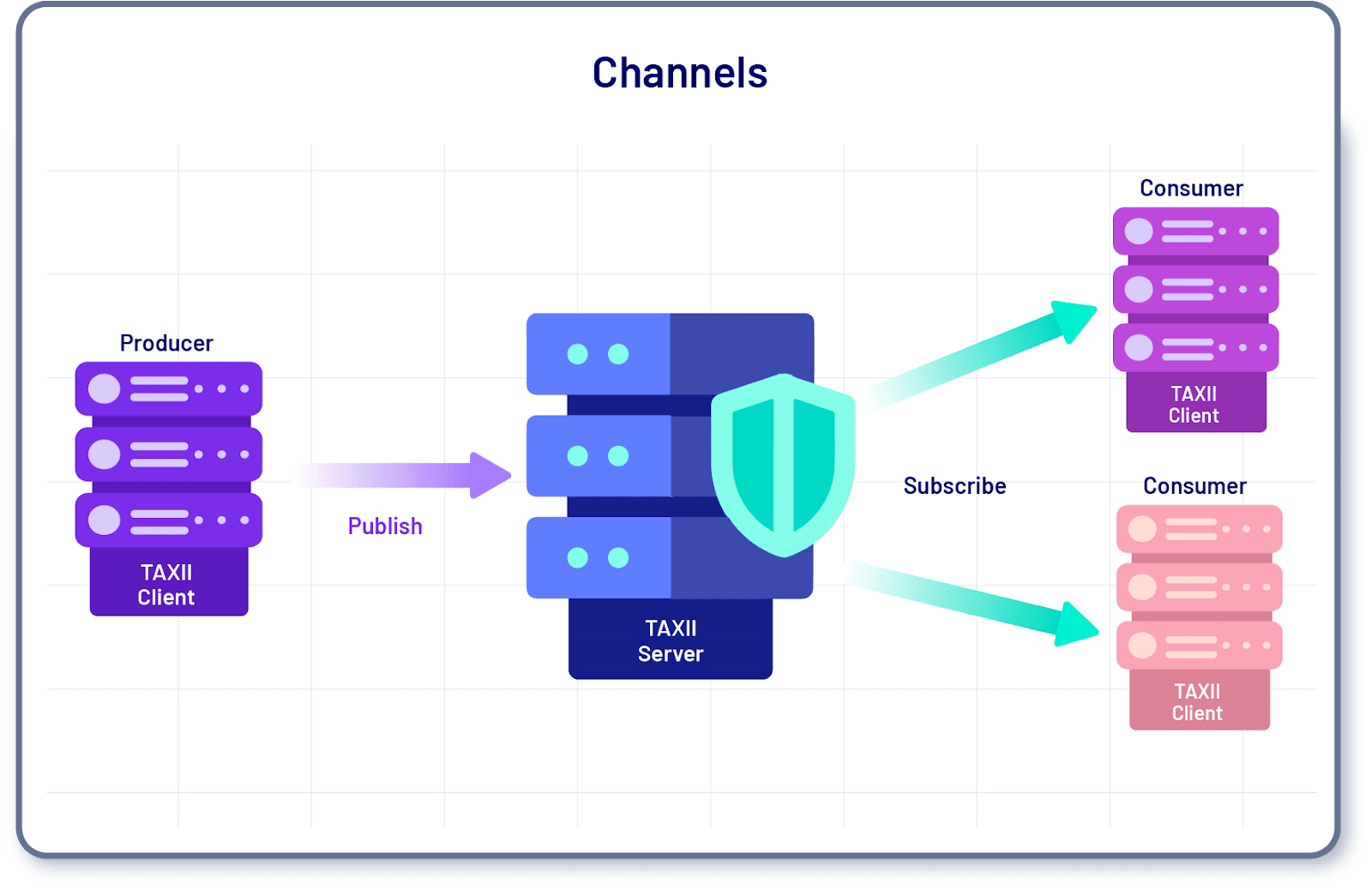 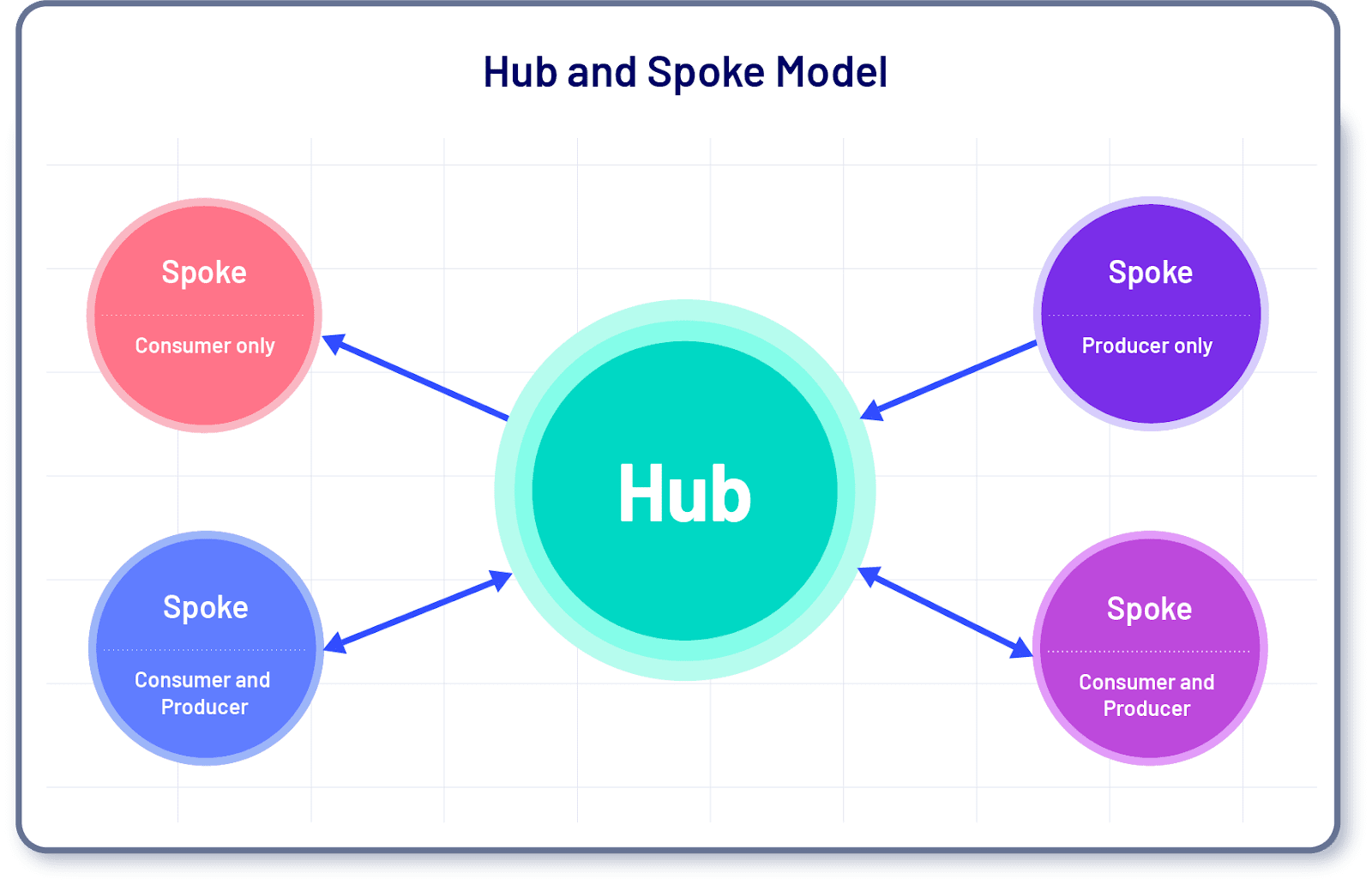 Peer-to-Peer Model: It is a decentralized communication model where organizations share equal capabilities. Since there are no client/server activities, any organization can share threat intelligence directly with each other. 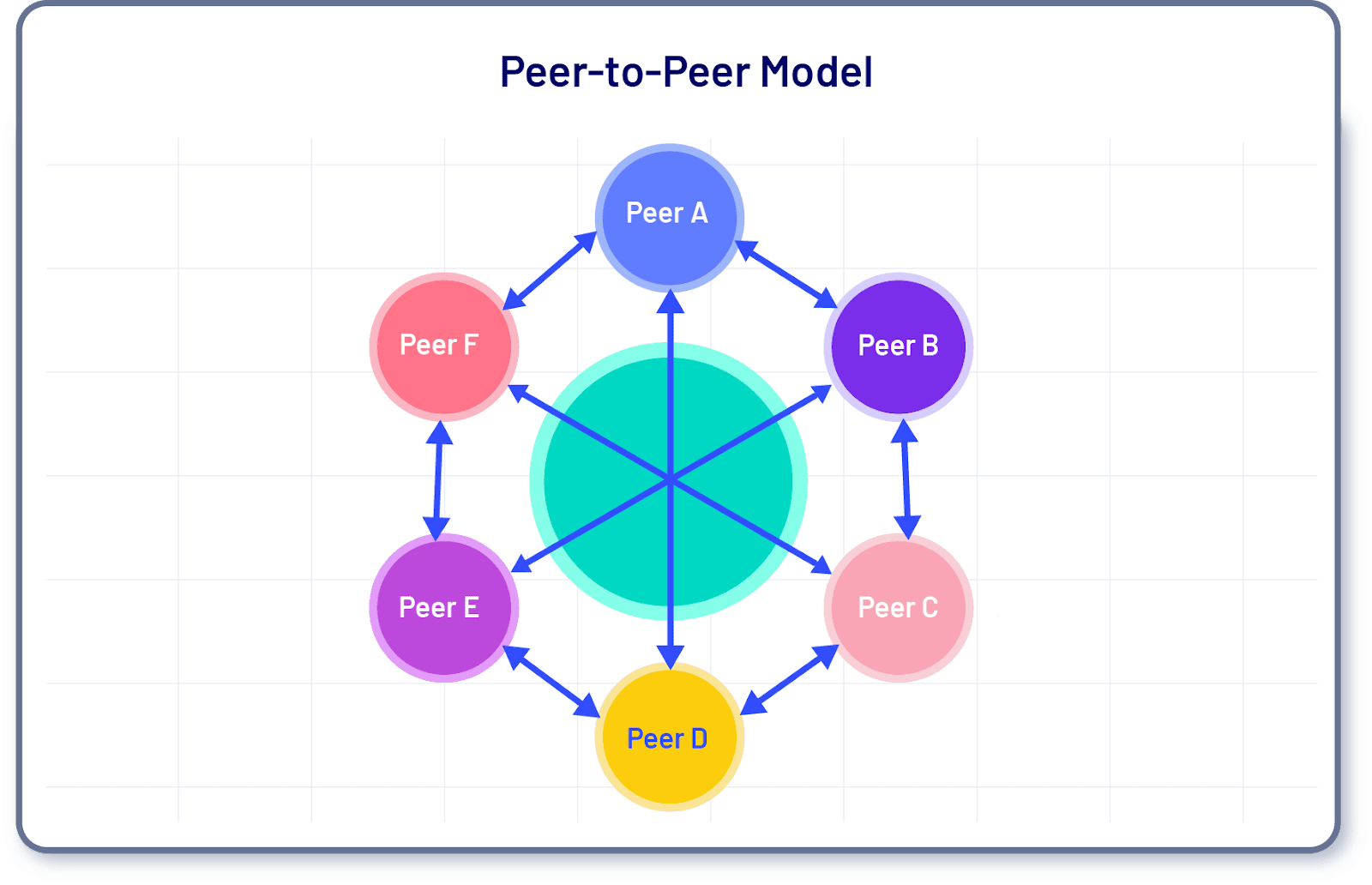 Source and Subscriber Model: In this sharing model, one organization acts as the single source of sending information to all subscribers. However, those consuming the intelligence do not share back threat intelligence with the hub. The source can be an Open-Source Intelligence (OSINT), or a publicly available threat report-sharing entity. 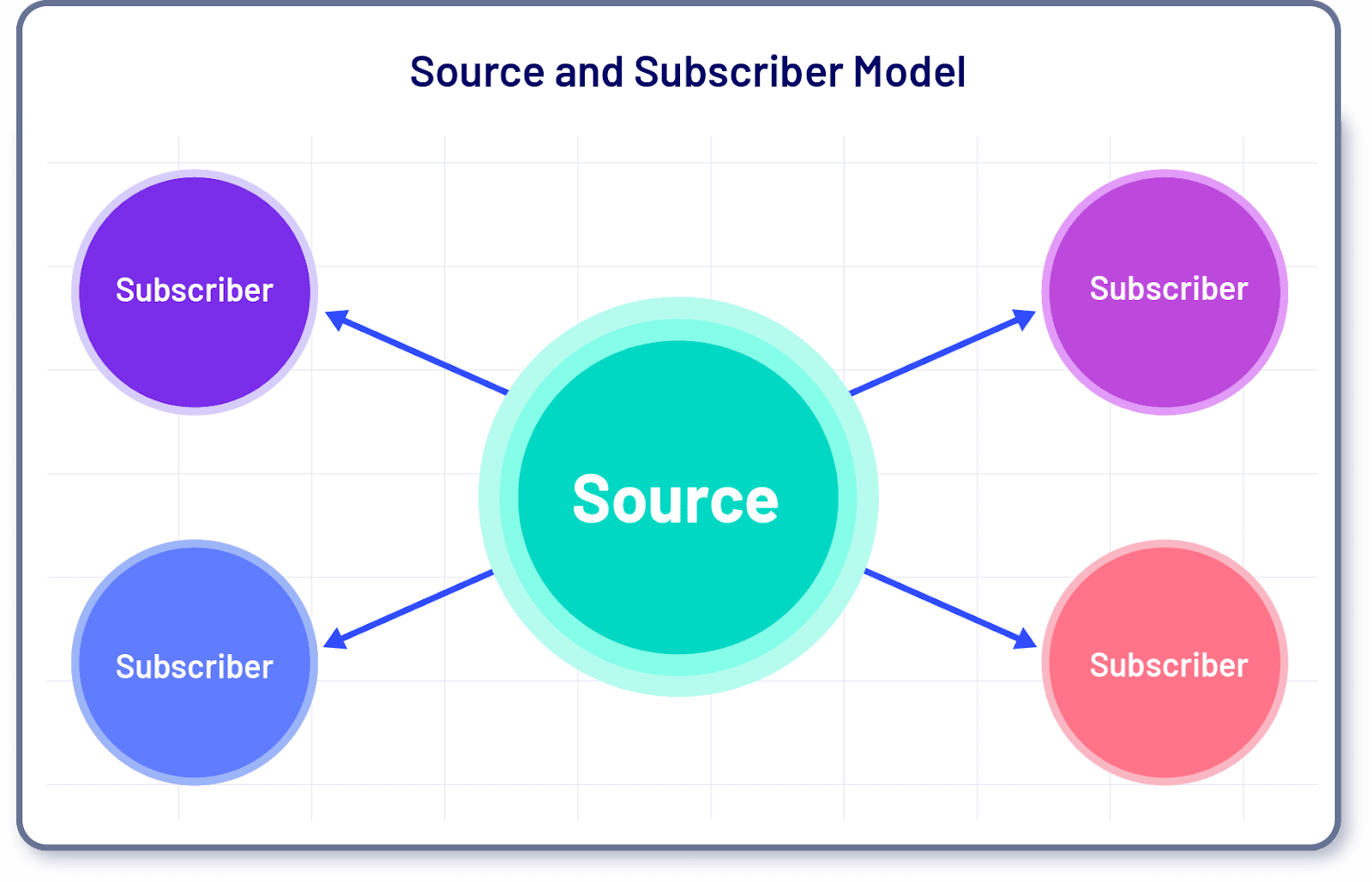 Why Hub and Spoke is the Most Widely Used Model?

In our evermore connected world, managing cyber threats has become more difficult than ever and it is not possible for an organization to defend itself by working in a silo. To tackle sophisticated cyber threats, the Hub and Spoke model, which enables two-way sharing of information, has proven more beneficial than others by enabling advanced situational awareness, improved decision-making, and security collaboration. The uniqueness of this model lies in the way it removes duplicate and redundant threat information before being shared with Spokes. Organizations using Threat Intelligence Platform (TIP) can set up a Hub that combines and anonymizes threat intel from different Spokes, after which only authentic and enriched data are shared with other Spokes that can be used for further analysis.
The effectiveness of this model also lies in the way it enables a private organization to build a trusted sharing community by facilitating bidirectional sharing of threat intelligence. By leveraging this model, a central organization can act as a central Hub and can create its own community with its vendors, peers, clients, and partners and share threat intelligence with them in a bi-directional fashion. Using the Hub and Spoke sharing model, organizations can also ingest real-time information from CERTs or other government or regulatory agencies, collaborate with sectoral ISACs and ISAOs, as well as exchange indicators with their clients and vendors. With access to relevant threat intelligence, organizations can accelerate investigation and alert triage processes against an incident in real time.