What is Low-Code Security Automation?

Why Do Enterprises Need Low-Code and No-Code SOAR?

Which One to Pick?

Enjoy the Best of Both Worlds with Cyware 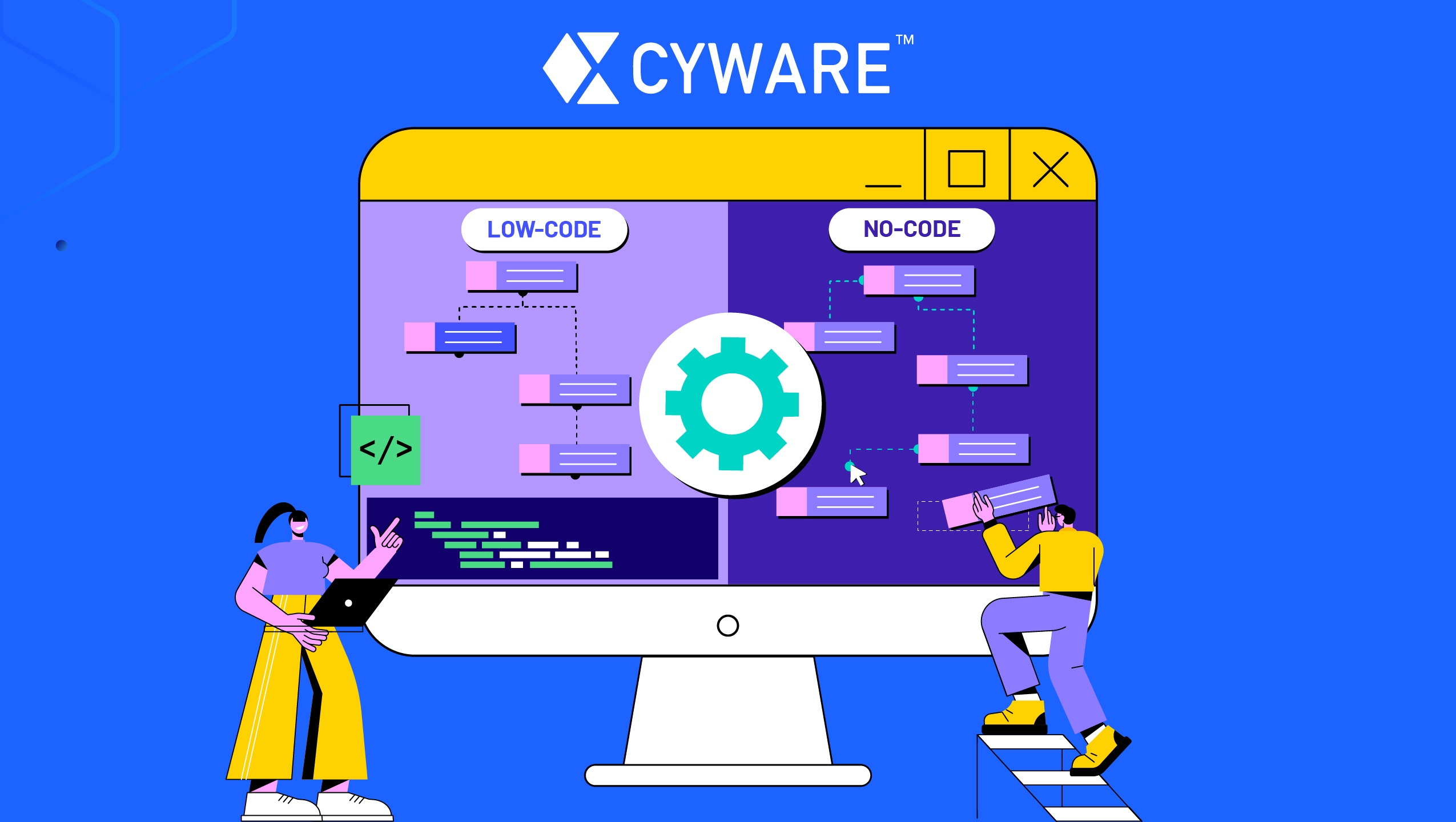 Security teams across the world are keen to learn about low code vs no code automation in the cybersecurity domain as the world is leaving behind aging software tools and gravitating toward more automated and innovative solutions. It’s no surprise that the call for IT modernization is gaining traction. By improving their conventional approach to security automation, modern-day organizations are rolling out the red carpet for low-code and no-code security automation solutions. According to Gartner, application development will shift to application assembly and integration, making the technological and organizational silos of application development, automation, integration, and governance obsolete. This will drive the rise of low-code application platforms (LCAPs). By 2025, 70% of new applications developed by organizations will use low-code or no-code technologies, up from less than 25% in 2020.
When it comes to cybersecurity, low-code and no-code automation tools show effectiveness in meeting the pressing need to digitize workflows and improve the security team’s overall efficiency and productivity. Both technologies allow organizations to own their automation capabilities and build new integration applications with little to no coding. While some low-code SOAR platforms still involve little coding or configuration, some no-code security orchestration and automation platforms provide codeless automation.
Let’s find out more about low-code and no-code security automation technologies and how different they are from one another.

What is Low-Code Security Automation?

Low-code security automation is an approach that demands little to no coding to design security processes and workflows. In a low-code automation platform, a user can just apply drag-and-drop features instead of writing heavy or complex codes.
Low-code automation platforms ingest, enrich, and act upon massive volumes of threat data at machine speed. Such platforms leverage webhooks and API-based integrations to hunt data and collect telemetry across different environments. The added advantage that low-code security automation solutions provide is the ability to customize playbooks as per the security requirements.

No-code security automation platforms do not require software developers to automate SOC processes. They use a drag-and-drop approach to security automation, which allows organizations to manage risks without falling back on engineering expertise and easily connect to any tool in their deployment environment.
No-code security automation is another rapid application development approach that is often considered a subset of low-code automation. However, unlike low-code automation, no-code SOAR has 100% reliance on visual tools and enables security teams to create quick-to-build functionalities with simple-to-use automations. This allows SecOps teams to automatically define risks, apply security rules, and remediate threats.

Why Do Enterprises Need Low-Code and No-Code SOAR?

By adopting automation technologies, SecOps teams can better coordinate and execute their security processes and functions across their technology stack. To automate their security operations, organizations are focusing on cyber innovation and have started embracing low-code and no-code SOAR security platforms.
Both low-code and no-code SOAR platforms are designed to help enterprises effectively manage the rising risks through automated threat identification and management. Low-code and no-code security automation platforms enable automated delivery of threat alerts from detection tools like SIEM and actioning in response tools. Moreover, their ability to automate the operationalization of threat intelligence helps enterprises identify and evaluate emerging threats. Whether low-code or no-code, both the SOAR solutions can integrate with different tools across various deployment environments—on-premises and cloud.
The modern-day SecOps strategies demand security-centric automation in all their processes. Low-code and no-code SOAR solutions are sufficiently large to fulfill the security automation needs of organizations. Enterprises with even minimal security resources can leverage the low-code or no-code SOAR tools as they are easy to deploy.
While both platforms overlap in some ways, they have several other different functionalities.

Several enterprises are espousing no code security automation today even though the features of such platforms are sparse. The reason is their ease of use; security teams can use them even without any coding experience. On the other hand, low-code security automation platforms are more adaptable and expandable due to their programming capabilities that allow security teams to set their automation goals for scale. Let’s dig deeper into the ways both the technologies diverge.

Unlike low code, no code SOAR platforms allow security teams to automate their workflows without writing a single line of code. They help them automate any process or manual task by adding rules that apply to their processes. Rules provide more control over the process, eliminate repetitive tasks, reduce human errors, boost efficiency, and save time. The user-friendly drag-and-drop UI accelerates the process of connecting the workflows just with a few clicks, automating the processes end-to-end.
Given that the majority of organizations have complex infrastructure spanning across cloud and on-premise environments, they require some coding to automate their workflows. In such scenarios, low-code security platforms have a competitive edge over no-code security automation platforms that are limited to only the prebuilt integrations provided by the vendor.

Scalable security automation is the need of the hour. Low-code SOAR platforms meet the changing needs of security teams, fulfilling the regulatory and compliance requirements. On the other hand, no-code SOAR is relatively less flexible and scalable as it often involves operational overhead and takes time to configure.

Which One to Pick?

By now you would have understood how low code vs no code automation plays out in the cybersecurity domain. Low-code SOAR or no-code SOAR, both have their own unique value propositions. Understanding the similarities or divergence between the two is important but not the deciding factor. At first, organizations need to assess their goals, target audience and their programming expertise, scope and scale of their problems, requirements for custom integrations, and obviously their security considerations. The ultimate way forward is to gauge all these factors to determine the user needs and accordingly make a choice between the two.

Enjoy the Best of Both Worlds with Cyware

Cyware Orchestrate offers both no code and low code security automation capabilities which can be leveraged by security teams for building automated workflows across their security and IT infrastructure. Unlike legacy SOAR platforms, which couple orchestration and automation with incident response, Cyware Orchestrate decouples orchestration from incident response, which is provided separately by Cyware’s Fusion and Threat Response platform (CFTR).
Customers looking for customizations can leverage the Python 3 editor feature in Cyware Orchestrate and take advantage of the low-code SOAR functionalities.
Cyware Orchestrate ships with 300+ app integrations and provides the functionality to build custom apps for more specialized features. It also includes a whole set of ready-made playbooks for common use cases and features a Playbook Canvas for easy drag-and-drop custom playbook creation.
Our complete product suite has been designed to work as a cyber fusion center, which unifies all cybersecurity functions under one platform and provides a single pane of glass to analysts and incident responders for advanced investigations and easy collaboration, automated playbook triggering, and faster threat response. Cyware’s Cyber Fusion Center was featured as a representative vendor in Gartner’s 2022 Market Guide for SOAR Solutions.
To know more about Cyware’s solutions, book a free demo.