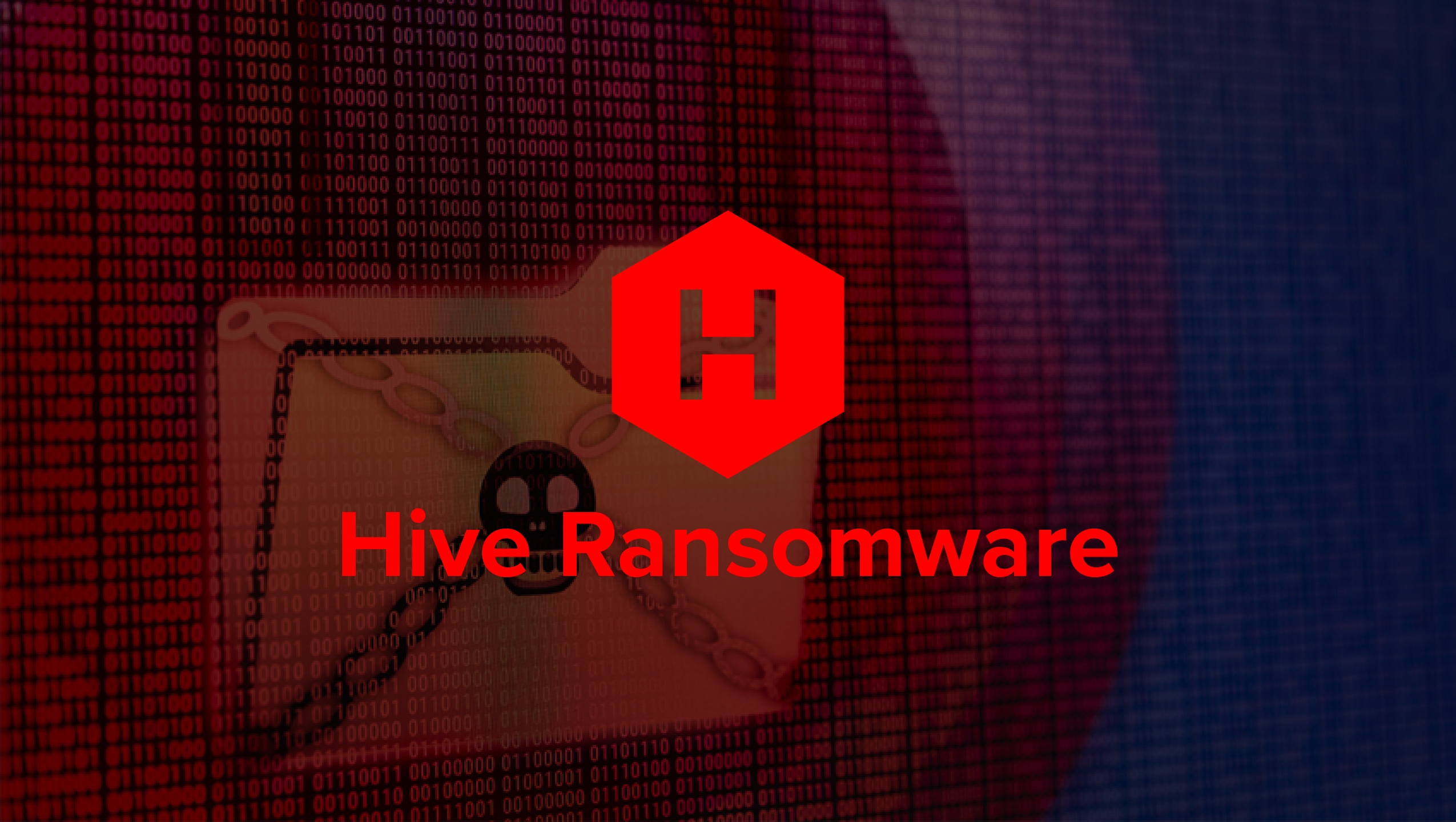 Hive is an affiliate-based ransomware family that first appeared in June 2021 and, within the span of a year, it became one of the key threats to enterprises worldwide. Written in Go, the operators behind the Hive ransomware are possibly Russian-speaking actors. Hackers use concurrency features of the language for faster encryption of files. The double extortion group also operates as a Ransomware-as-a-service (RaaS).
As noted in a Group-IB report, the group successfully penetrated the networks of 355 companies within a span of just six months. Furthermore, the group is infamous for aggressively targeting healthcare providers and hospitals. The group had targeted the healthcare sector during the testing times of the COVID-19 pandemic as well.

Initially, Hive did not have any public affiliate programs, and it was unknown whether the group used the RaaS model or operated as a private group. However, that clarity came later through an underground forum wherein a user was found promoting an affiliate program, which eventually turned out to be Hive.
The initial variants of this malware were Windows-specific, however, a new ransomware strain was observed in October 2021 that specifically targeted Linux and FreeBSD. A new variant surfaced in March 2022 wherein a new obfuscation technique (IPfuscation) was used by the Hive ransomware group. The same month, the operators converted their VMware ESXi Linux encrypter to the Rust language. The use of Rust language made the ransomware sample more efficient and harder to reverse engineer. This feature was reportedly borrowed from the BlackCat ransomware operation.
In parallel, a new ransomware named Nokoyawa was also spotted in the wild, which is believed to have links with Hive. Both the ransomware strains share several similarities including the use of Cobalt Strike and legitimate tools such as anti-rootkit scanners (for defense evasion). 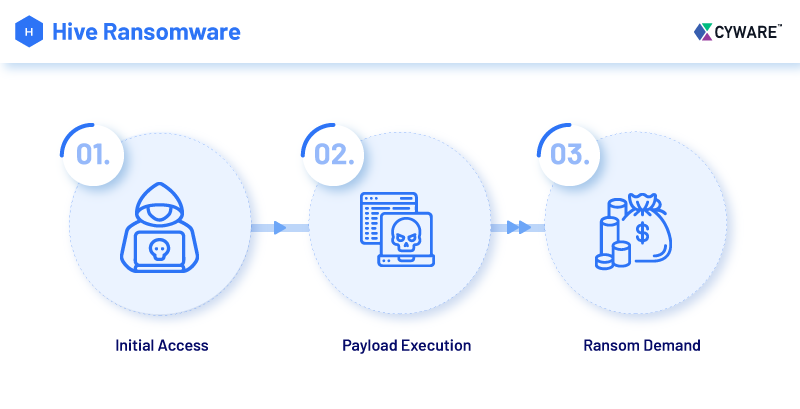 Hive’s affiliates use various mechanisms to infect victims' networks, such as phishing emails with malicious attachments, leaked VPN credentials, and abiding vulnerabilities on external-facing assets. For example, one of the Hive affiliates had successfully exploited Microsoft Exchange via vulnerabilities known as ProxyShell.

Upon execution, it terminates computer backup, antivirus, antispyware, and file copying features of the OS. Then, it identifies and stops database (SQL, Oracle, Postgres, Redis), backup (BMR, VSS), and protocol (sstp) services. It then terminates the mspub and msdesktop processes and uses hive[.]bat and shadow[.]bat to start the encryption process excluding the C:\Windows drive.
After infection, the ransomware first attempts to dump credentials, attempts to cache cleartext credential data, and then uses the ADrecon to map, traverse, and enumerate the Active Directory (AD) environment. Other legitimate tools used by Hive in their attacks are Cobalt Strike and ConnectWise to maintain persistence and for a better reach across the targeted network, respectively.

In the end, the Hive drops a ransom note that threatens to publish the victim's data on the TOR website 'HiveLeaks' unless victims agree to the demands. For that, the victims are given unique credentials for the Hive Portal and a deadline of two to six days for payment. If not, the data will be leaked to HiveLeaks.

The group has been observed targeting multiple sectors, including nonprofits, retail, energy, media, education, manufacturing, telecommunication, material, technology, and government. The most targeted countries are Argentina, Brazil, the U.S., Thailand, Italy, Spain, Colombia, France, Saudi Arabia, and El Salvador. A report from Trend Micro has revealed that the most targeted sectors are energy, healthcare, and financial services. 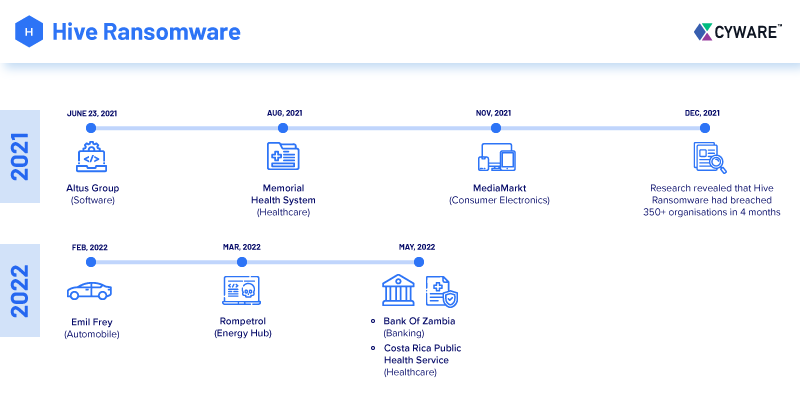 To stay protected from the Hive ransomware, it is suggested to create, maintain, and follow a strategic cyber incident response plan, resiliency plan, along with associated communications plan in case of an incident. Immediately fix any internet-facing vulnerabilities and misconfigurations, and use email security gateways to reduce the risk of phishing emails from reaching end users. Additionally, remove applications that are not in use, and monitor abnormal termination of the BMR, SQL, Oracle, Postgres, Redis, VSS, backup, sst services along with mspub and msdesktop processes.
In fact, looking at the current threat environment, traditional threat intelligence management practices could also fall short when it comes to making time-critical decisions. Organizations can unlock new power by enabling faster collaboration through threat intel platforms, and thus make well-informed decisions against new or emerging threats by ingesting, correlating, and operationalizing high-fidelity threat intelligence.
Note: [In February 2022, researchers, theoretically, cracked the encryption code of Hive ransomware and weaponized the flaw to recover 92–98% of the master key. Due to this major development, it was possible to guess the keystreams and recover the master key to decode the encrypted files without needing a private key. Researchers are reportedly trying to find ways to leverage this method for developing a working decryptor.]

Hive ransomware is new yet has already become one of the most prolific and aggressive ransomware families that exist today. The ransomware operators are constantly refining and diversifying their TTPs to make their malware efficient. This makes it harder for the security community and organizations to stay protected. Entities with inadequate security measures in places are doomed to be targeted by the threats like Hive. Thus, organizations are suggested to stay vigilant and prepare themselves with adequate security in place.